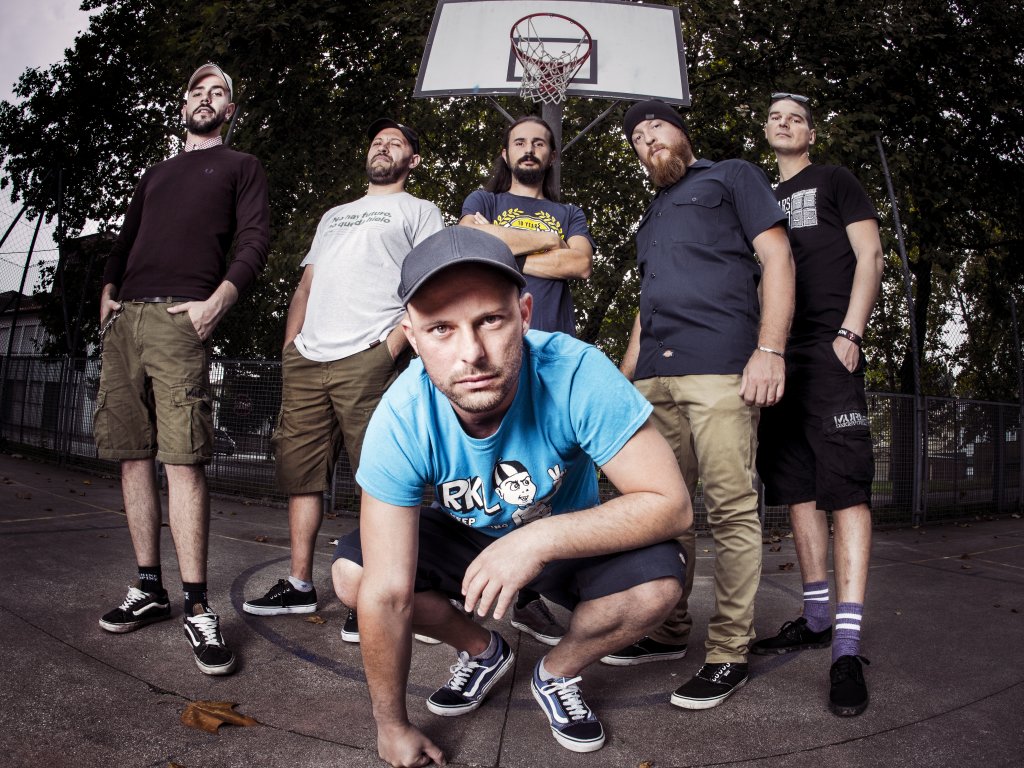 Speaking of Talco, it’s easy to think of a road wich is getting so long you cant see the end. A road that started 10 years ago. Starting at the small venues in Marghera, their first record “Tutti Assolti” arrived in 2004, produced by “Kob Records” y “Mad Butcher Records”. All the magazines says that “something unexpected” is happening at the italian punk scene, wich lived in a period of crisis.
The energy of this first record is also felt at their first appereances in public, thanks to some DIY shows booked abroad and specially thanks to “Punkitalia” (Berlin, 2005) where the band were the highlight of that night. The band started to gain following in Italy and Europe with their two next records “Combat Circus” (2006) and “Mazel Tov” (2008) wich saw a more personal and mature style that the band labeled “Punk-Chanka” in tribute to Mano Negra, mixing Rock, Ska, Folk, etc… but keeping the punk roots.
With the “Mazel Tov” tour, the band appears at some of the most important european festivals, beeing the italian band most active in Europe.
In 2010 “Destiny Records” signs TALCO, repressings “Combat Circus” and “Mazel Tov”, and publishing in 2011 “La Cretina Comedia”, where the band shows a more refined lyrics, not very common at the punk scene.
The tour of “La Cretina Comedia” is an undisputted success, where the band can hang on the “Sold out” banner at venues all around Germany, eastern Europe, Russia, France and Spain.
In 2012 the band recorded their most succesful record up to date, “Gran Gala”. The single “La Danza dell?Autunno Rosa” it’s an inmediate hit, and the crowds and the venues goes larger and larger, playing 200 shows in two years.
2014 it’s a very important year; the band celebrates their first 10 years of activity and the becoming of one of the most important and well known bands of their scene in Europe. 10 years full of events and experiences…
A live record is made in Iruna to celebrate all these 10 years, and this recording became a double LP/CD + DVD with a documentary with various footage of the band along their early years until today.
The “10 Years” tour was the afirmation of how much the band has consolidated their success, appearing again at various festivals around the european geography.
And after such important tour that brought the inevitable changes that made the band grow like never before, a new record, “Silent Town” released by “Kasba Music”, appears; a new project that mixes the strenght of “Combat Circus” y “Mazel Tov” with the melodies of “La Cretina Commedia” and “Gran Gala”. It?s proably the most mature TALCO record, a project the band has been building for many years that now is ready.
====================
Talco — 2001 — Mentolato (EP)
Talco — 2004 — Tutti Assolti
Talco — 2006 — Combat Circus
Talco — 2008 — Mazel Tov
Talco — 2009 — St. Pauli (EP)
Talco — 2010 — La Cretina Commedia
Talco — 2012 — Gran Gala
Talco — 2014 — 10 Years
Talco — 2015 — Silent Town
Talco — 2018 — And The Winner Isn’t (Deluxe Version)
====================
Band: Talco
Genre: Ska-Punk
Quality: 320 kbps
Country: Italy, Marghera
Size: 777 mb
====================
Discogs: https://www.discogs.com/artist/1033069-Talco
Facebook: https://www.facebook.com/talcopunkchanka
Download
Punk RockUSAPop PunkHardcore PunkGermanySkate PunkStreet PunkOi! PunkHardcoreEnglandCanadaSka-PunkSpainMelodic HardcoreRockRussiaMetalcorePunk 77ItalyPost-HardcoreFranceCeltic PunkBrazilJapanAustraliaSwedenSkaEmo PunkMexicoPost-PunkReggaeArgentinaNetherlandsAlternativeCrust PunksXeFinlandAcousticHorror PunkBelgiumAustriaAnarcho PunkCrossoverChileSwitzerlandIndie RockSkacorePolandRocksteadyNorwayIndonesiaCompilationPsychobillyWalesColombiaFastcoreCzech RepublicSerbiaScotlandThrash MetalInternationalPeruHungarySouth Korea