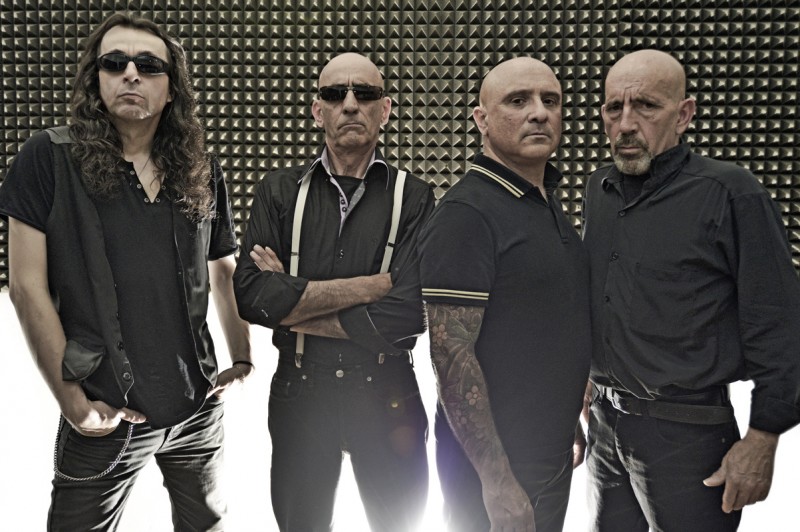 Bastard children of Rock and Roll saw the light in the year 1980, in a Barcelona with the stench of the Franco dictatorship still present. Through an advertisement in a store of musical instruments, they found two brothers raised in the suburbs of Paris; Miguel and Manuel Alferez. And two young friends from the neighborhood of Poble Sec; Xavier Vilaro and Carlos Trevino. Decibelios had just been born. Later and after the departure of Xavier Vilaro, Manel Domenech, former Masturbadores Mongolicos, joined the band. The musical influences of Decibelios were the Hard Rock and the Punk, because it adapted perfectly to the letters that they had, and still have, a strong component of social denunciation seasoned with singular touches of humor. Conscious and proud of his humble origins, Decibelios, he knew how to create his own identity through what they called Rotten Rock. Motivated by the pestilence of the Barcelona metro with which they moved around the city.
Decibelios’ first job, «Caldo de Pollo», was a clear nod of complicity to the working class. Fray, lead singer and lyricist of the band, great admirer of Wendy O. Williams of Plasmatics; «The Queen of Shock Rock», with the support of the utensils created by Miguel and Manolo, both locksmiths, created some stage shows, imaginative, forceful and innovative, becoming one of their hallmarks. Decibels, always in a boil, far from being satisfied with his initial style, where speed and choirs were his main characteristic. They begin to take a turn influenced by the demanding Jamaican rhythms, whose particular identity between street, nostalgic and mysterious, is very close to the character of the group. Becoming one of the first Ska bands in the country, starting with the legendary Ska «Voca de Dios», produced by the independent label DISCOS DRO. As his next and third work, «Vacaciones en el Prat», completely Ska-Oi! style. In the final stretch of his first stage, 1980-1990, Decibelios, under the production of Rosendo, create their latest work, «With time and a reed», in which the band gives a rudder to other rhythms. It was at this stage that the new guitar David Ocana, current guitar of Decibelios, joined the band.
This would be the last work before its dissolution, a decade of important changes in Spanish society and in the musical world of the time. The last throes of the hippie movement, the explosion of Punk, the arrival of supposed democracy and the recovery of liberties. Far from being pigeonholed, the music of Decibelios was changing over time, not so with his posture and the message of his lyrics. Decibelios was, and is, a serious and coherent band with itself, stoically supporting a part of the legend, which has nothing to do with them. Faithful to its principles, in good times and in less good times, 23 years later, Decibelios returns. Conscious and sensitive of the degradation suffered by the country’s social, political, cultural and economic situation. Decibels, with strength and anger, still has much to say. The Oi! & Roll.
====================
Decibelios — 1984 — Caldo De Pollo
Decibelios — 1985 — Oi!
Decibelios — 1986 — Vacaciones En El Prat
Decibelios — 1988 — Vivo’s 88
Decibelios — 1989 — Con El Tiempo Y Una Cana
Decibelios — 1994 — Paletas y Bolingas
Decibelios — 2000 — Boina! Grandes Exitos
Decibelios — 2015 — A por Ellos!
Decibelios — 2018 — Insurgents
====================
Band: Decibelios
Genre: Oi! Punk / Ska
Quality: 320 kbps
Country: Spain, Barcelona
Size: 827 mb
====================
Facebook: https://www.facebook.com/decibeliosoficial
Download
Punk RockUSAPop PunkHardcore PunkGermanySkate PunkStreet PunkOi! PunkHardcoreEnglandCanadaSka-PunkSpainMelodic HardcoreRockRussiaMetalcorePunk 77ItalyCeltic PunkPost-HardcoreFranceJapanBrazilAustraliaSwedenSkaEmo PunkMexicoPost-PunkReggaeArgentinaNetherlandsAlternativeCrust PunksXeFinlandAcousticHorror PunkBelgiumAustriaAnarcho PunkCrossoverChileSwitzerlandIndie RockSkacorePolandRocksteadyNorwayIndonesiaCompilationPsychobillyColombiaWalesFastcoreCzech RepublicSerbiaScotlandThrash MetalInternationalPeruHungarySouth Korea