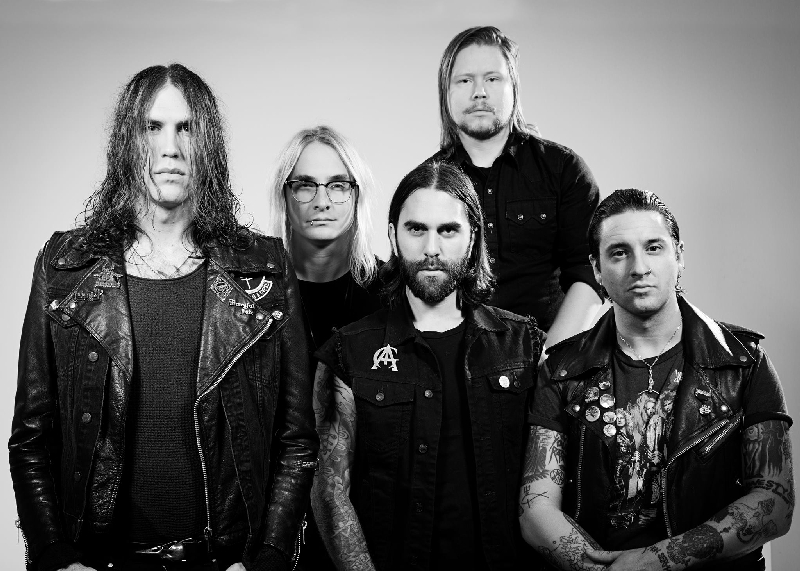 Atlas Losing Grip have successfully merged melodic punk rock with the grandeur and power of heavy metal. The January 2015 release of “Currents,” the band’s third full-length, marks a ten year anniversary since the start in Lund, a city that has played an important role for the melodic Swedish punk rock heritage, with Bad Taste Records and bands such as Satanic Surfers and Astream.
Indeed, after the debut record “Shut The World Out” in 2008, Atlas Losing Grip recruited Rodrigo Alfaro, the legendary singer of Satanic Surfers. In 2009, Rodrigo’s unmistakable voice, stronger and more confident than ever, was heard on the mini-cd and 10” vinyl record Watching The Horizon.
Atlas Losing Grip had taken giant steps forward, and on top of it all added one of the genre’s best vocalists. Frequent European tours began, as Atlas night after night proved themselves in front of club and festival audiences. Even so, few could imagine the magnitude of what the five-piece had been working on in between tours and opening up for bands such as Bad Religion. In 2011, Atlas Losing Grip finally revealed “State Of Unrest” as their second album. What “Watching The Horizon” had hinted on came in full bloom as Atlas unbuckled and stepped on the gas pedal.
The massive song structures, nurtured by enchanting melodies and carried forward by flawless instrumental work, topped with Rodrigo Alfaro’s perfectly communicated melancholy, instantly set Atlas apart. Over 180 shows were played in support of “State Of Unrest”, not only continuing the European quest, but also adding Brazil to the already long list of countries that has greeted Atlas Losing Grip with praise.
The recordings of “Currents” began in 2013, and lasted well into 2014. The result is a record that will secure Atlas Losing Grip as one of the greats, not only in their time, but of all punk history. Daring more, reaching further, achieving everything they set out to.
Continuously pushing their capacity forward, the 14 tracks on “Currents” forcefully break down the dividing line between melodic traditions inherit in both punk rock and heavy metal, through Atlas Losing Grip’s mastering of both. Enriched with the desire to never hold back, Atlas Losing Grip stand shoulder to shoulder with giants. Thus, on “Currents,” the catchy punk rock of Bad Religion and Propagandhi finds itself flanked by the celebratory power of Iron Maiden and Metallica.
The honest outpourings that have become a trademark of singer Rodrigo Alfaro reach a self-therapeutic level on “Currents.” A record born from struggle, it bears the mark of a life lived with the soul scars to prove it. The question Atlas Losing Grip throws at the listener with “Currents” is whether the energy, attitude, and ethics of punk has ever fit so perfectly with the larger-than-life possibility contained in the musical expression.
====================
Atlas Losing Grip — 2009 — Watching The Horizon (EP)
Atlas Losing Grip — 2011 — State Of Unrest
Atlas Losing Grip — 2015 — Currents
Atlas Losing Grip — 2018 — Shut The World Out (Remastered)
====================
Band: Atlas Losing Grip
Genre: Punk Rock / Skate Punk
Quality: VBR-320 kbps
Country: Sweden, Malmo
Size: 350 mb
====================
Discogs: https://www.discogs.com/artist/1665123-Atlas-Losing-Grip
Bandcamp: https://atlaslosinggrip.bandcamp.com
Facebook: https://www.facebook.com/atlaslosinggrip
Download
If you want to support our site, buy a premium on Turbobit