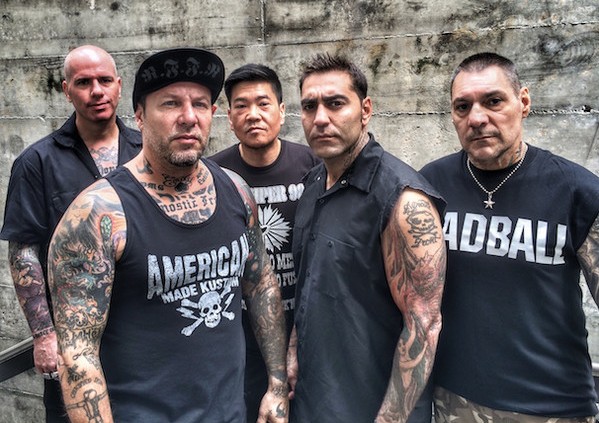 Agnostic Front is an American hardcore punk band from New York City. Founded in 1980, the band is considered an important influence to the New York hardcore scene, as well as for pioneering the crossover thrash genre. Formed by guitarist Vinnie Stigma (born Vincent Capuccio, formerly of the Eliminators) in December 1980, with Diego on bass and Rob Krekus on drums. Agnostic Front went through several singers, two of them being John Watson and Jimmy «The Mad Russian», before settling with Roger Miret (former bass player of The Psychos). They soon added Ray Barbieri, aka Raybeez, on drums and Adam Mucci on bass. Their debut EP, United Blood, released in 1983 on an indie label, has since become a collector’s item. 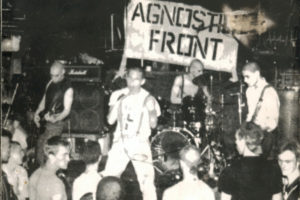 The follow-up, Victim in Pain (1984), is regarded as a seminal New York hardcore release. Dave Jones replaced Raybeez on drums, and Rob Kabula took over on bass. In 1984, Jimmy «The Kid» Colletti from Justified Violence joined on drums when the band went to tour with The Exploited later that year. The album pushed the band to the forefront of New York’s fledgling hardcore scene, which was centered around CBGB, where they played with bands like Cro-Mags and Murphy’s Law. Roger Miret asserts that all the songs on the album «are totally inspired by the streets of New York and my life and what was going on with my friends. It was dangerous. We did what we had to do to survive by any means necessary. It was like a war or a battlefield, and we stood our ground». 1986’s Cause for Alarm was a difficult album to record, due to constant line-up changes and personnel problems. Released on Combat Records, it added thrash metal influences. With other bands such as Suicidal Tendencies and Stormtroopers of Death, this album would mark AF’s foray into the world of crossover thrash. It also featured some lyrics written by Peter Steele and drumming by Louie Beateaux. 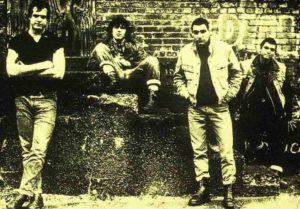 With yet another new line-up, the band soon released Liberty and Justice for… in 1987. The album featured stripped down punk with a lack of thrash influences, yet it contained many metal-style guitar solos. It did not sell nearly as well as previous releases. Sometime later, Miret was arrested on drug charges after releasing a live album, and spent his time in prison writing new songs while Stigma and the band toured Europe for the first time. The lyrics written by Miret while incarcerated formed most of 1992’s One Voice, which featured members of Madball and Sick of It All. Not long after its release, the band decided to call it quits. Their last show was at CBGB on December 20, 1992; Last Warning, which was also released with United Blood EP on the end of the release. 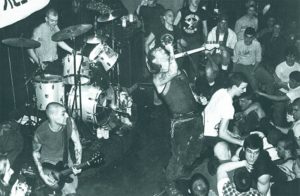 Stigma and Miret reformed Agnostic Front in May 1996 and did a few reunion shows in December 1996, signing to Epitaph Records and recruiting Jimmy Colletti on drums and Rob Kabula on bass, who was playing with Against The Grain at the time. Their latest venture was titled Something’s Gotta Give. In 1999, they followed up with Riot, Riot, Upstart. They also won an MTV award for the title track music video. Their comeback albums have sold well and been mostly acclaimed by music critics for their pure hardcore punk sound. 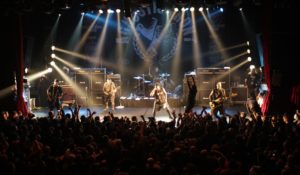 In 2001, they released the album Dead Yuppies. Songs from this album were rarely played live, as the band considered it more a product of Loved and Hated, Jimmy Colletti’s side-project band. In 2002, Miret worked on a side-project band, Roger Miret and the Disasters, looking for a sound akin to old school punk rock and oi!. Also that year, the band appeared in Matthew Barney’s film, Cremaster 3 along with Murphy’s Law. Agnostic Front came out in 2004 with Another Voice. The album was regarded mainly as a follow-up to One Voice. The album, however, did receive some criticism from fans and the press for apparently changing their music to fit the current wave of ‘tough guy’ bands. Musically, the album bears resemblance to bands that were heavily influenced by Agnostic Front, such as Hatebreed. Miret’s vocals on the album particularly seemed to turn off many less hardcore punk-oriented fans. Later, the track «Peace» was contributed to the mash-up album Threat: Music That Inspired The Movie, where it was remixed by Schizoid and renamed «World At War.» 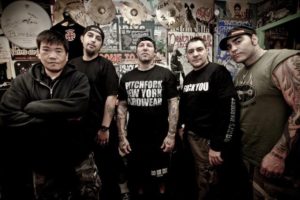 On March 7, 2006, Agnostic Front released their long-awaited DVD «Live at CBGB». This follows the efforts of many bands that tried to save CBGB from shutting down. Even though Miret claims that «We played more shows at CBGB than any band ever, and we played more benefit shows for CBGB than any band ever» when the club did close, most nostalgia focused on 1970s punk bands. On November 6, 2007, Agnostic Front released the album Warriors with the hit «For My Family» which was largely a continuation of the band’s crossover thrash sound. In 2015, the band released the album The American Dream Died via Nuclear Blast Records which consisted mostly of the bands older style of music with a modern touch. The band continued to tour extensively in Europe as well as the U.S. in support of the record. 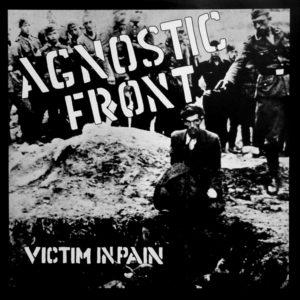 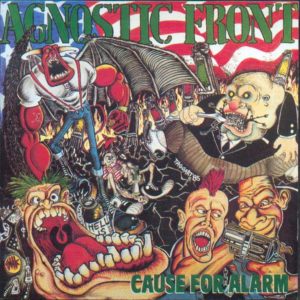 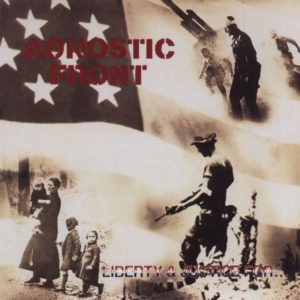 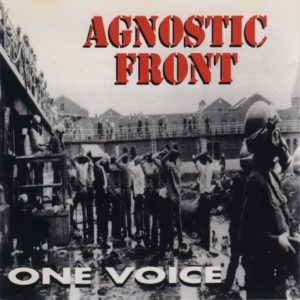 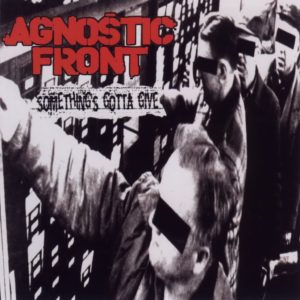 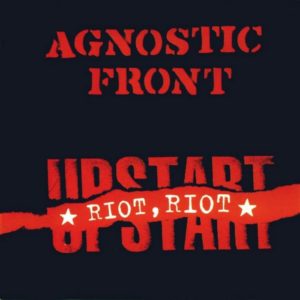 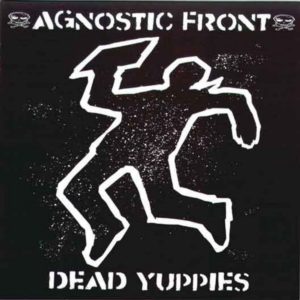 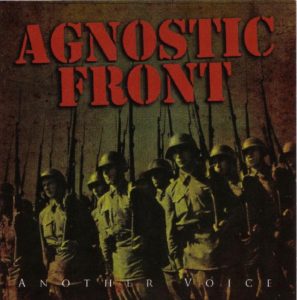 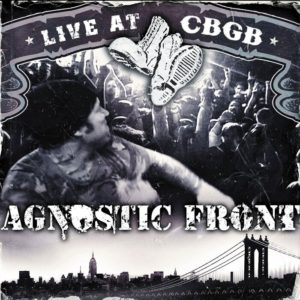 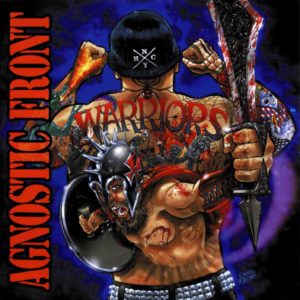 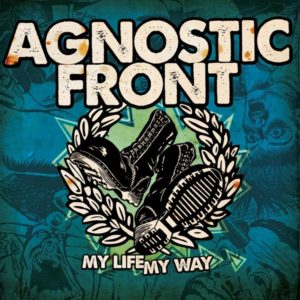 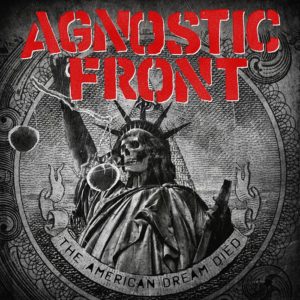 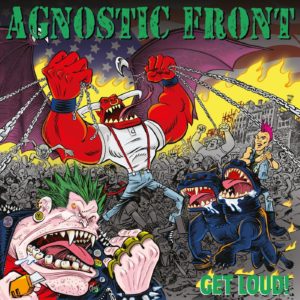